Prof. Thomas Jespersen and Prof. Jakob Tfelt-Hansen from Rigshospitalet have received DKK 15 mio for a project that will create new knowledge on electrical disturbances in the heart and thereby strive to minimize the number of people dying as a result. 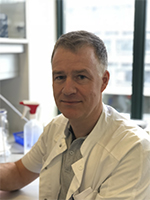 ​Together with Professor and Chief Physician Jakob Tfelt-Hansen from Rigshospitalet, Professor Thomas Jespersen has received one of the impressive Tandem grants of DKK 15 million for the project "Sudden Arrhythmogenic Death Syndrome in the Young (SADS-Young)".

The project aims at creating new knowledge on electrical disturbances in the heart and thereby strive to minimize the number of people dying as a result.

"Sudden and unexpected death from electrical disturbances in the heart is one of the most common causes of death among Danes younger than 50 years.
The people dying are often apparently healthy, and the reason is rarely discovered. Several unknown risk factors for these tragic deaths will be identified by combining nationwide health registries with autopsy results and genetic analysis and studies on biological model systems. This will contribute to extremely useful knowledge in clarifying which people – both close family members and in society as a whole – risk the same fate." Professor Thomas Jespersen says.

The Novo Nordisk Foundation has awarded a total of nearly DKK 60 million from their Tandem Programme to four innovative and translational research projects and researchers from BMI were part of two applications both of which have been approved, giving the Department a success rate of 100 %.

Besides Professor Thomas Jespersen's Tandem Grant, Professor Jens Juul Holst has also received an impressive Tandem grant together with Professor and Chief Physician Filip Knop from Gentofte Hospital and Steno Diabetes Center Copenhagen for a project that will create new knowledge on glucagon, a hormone secreted by the pancreas.