Associate Professor Morten Salling Olesen from BMI has participated in identifying the syndrome behind a newly discovered inherited heart disease. The discovery has just been published in the prestigious New England Journal of Medicine. 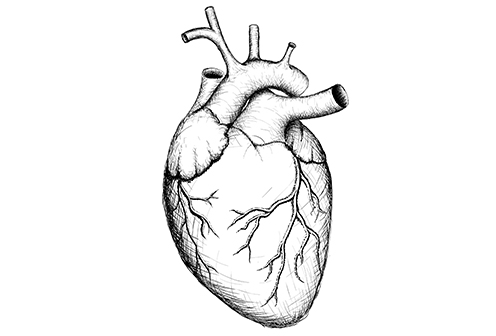 Discovery of new diseases is rare. Nevertheless, this is exactly what Professor Henning Bundgaard, Consultant and head of the Division for Inherited Heart Disease at Rigshospitalet, has done. Subsequently, along with a group of research partners in Denmark, the Netherlands and the UK, he has systematically described this newly discovered genetic heart disease.

"The discovery was triggered by a very unusual pattern in the electrocardiogram (ECG) of a man who survived a cardiac arrest. The ECG made us curious, and we looked further into it," said Henning Bundgaard, who discovered the strange heart syndrome. Examinations of the patient's family revealed identical abnormal ECGs in several relatives.

"The changes in the ECGs had some resemblance with those found in patients with coronary artery disease, but turned out to be caused by something entirely different: a hereditary change that had never been described before. Therefore, it was easy to overlook that the changes were in fact the result of something else," continued Henning Bundgaard.

Subsequently, the syndrome was found in two other Danish families, and researchers in inherited heart diseases from Oxford and Amsterdam found another two families with exactly the same syndrome. Common to the families is that the family members with abnormal ECGs may experience serious disturbances of the heart rhythm; some develop reduced pump function of the heart; and in some cases the disease has caused sudden death.

Computerome at work
To identify the syndrome, Associate Professor Morten S. Olesen, Department of Biomedical Sciences at the University of Copenhagen and Rigshospitalet, have collaborated with professor Søren Brunak from the University of Copenhagen and Associate Professor José MG Izarzugaza from DTU Bioinformatics to analyse genomic data from the families and determine the structure of their genetic material. For this purpose, they used Computerome, one of the world's biggest supercomputers for biological data processing. Computerome is physically installed at the DTU, Risø campus.

"Normally, we would examine the families' genes and look for mutations shared by all the families and not found in the general population. But in this project, we instead investigated whether genetic changes already known to cause heart disease were present in these families. It turned out that they weren't, and this substantiates the discovery of a new syndrome,” said José MG Izarzugaza, head of the Integrative Systems Biology research group.

DNA profile
In order to do this, the experts on bioinformatics drew on experience of mapping the Danish genome, said Søren Brunak from Novo Nordisk Foundation Center for Protein Research, University of Copenhagen. In the Danish Reference Genome Project, 50 Danish families (mother, father and a child) donated blood for research purposes. The 150 genomes provide detailed knowledge about genetic variations and deviations particularly representing the Danish population. Even though the reference genome describes Danish genetic material, the knowledge resulting from the project is of international relevance as it can promote development of personalised medicine.

Just like the reference genome, genetic material from the families suffering from the novel syndrome can be used to help other patients with similar symptoms in the future, as the disease can easily be mistaken for other conditions. This means that the researchers are not sure how many people are suffering from the disease, and how many have been misdiagnosed.

Enhancing efforts to develop personalised medicine
"Once we understand the underlying genetic change, we can use this knowledge in future screenings. This means that by mapping a patient’s DNA, we can establish whether the patient has a hereditary predisposition to this newly discovered heart disease.  When the disease-causing (“bad”) gene has been identified, we expect that this information will at the same time give us insight in the mechanism that causes the disease at cell level. This mechanism will then be the target for further research. The next step is the overall goal - when we know the mechanism of the disease, we will have the chance to develop a treatment to protect patients suffering from this syndrome,” said Henning Bundgaard.

The discovery and continued work on the syndrome illustrate the importance of the formal collaboration project, Copenhagen Health Science Partners, which includes cardiology departments in the Capital Region of Denmark and research teams at Copenhagen University.