In a new project, Professor Jens Juul Holst and Professor, Chief Physician Filip Knop from Herlev Hospital will create new knowledge on glucagon, which plays a major role in regulating blood glucose. The project is funded by the Novo Nordisk Foundation. 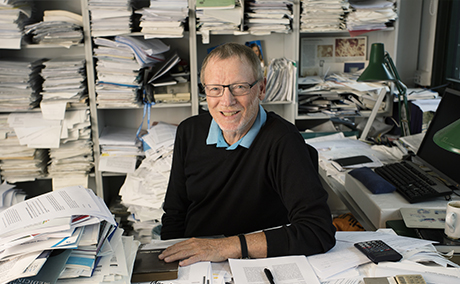 Together with Professor, Chief Physician Filip Knop from Herlev Hospital and Steno Diabetes Center Copenhagen, Professor Jens Juul Holst and Postdoc Nicolai Wewer Albrechtsen have received a Tandem grant from the Novo Nordisk Foundation for a project entitled “A new understanding of glucagon physiology – the Liver-alpha cell axis”. The project aims at creating new knowledge on glucagon, a hormone secreted by the pancreas that plays a major role in regulating blood glucose.

“Many people know the pancreatic hormone insulin and know that people with diabetes have elevated blood glucose levels resulting from insufficient secretion or effect of insulin, which is why insulin is used in treating diabetes. However, few know that people with diabetes also have elevated levels of glucogen, the other important hormone produced in the pancreas. Glucagon is crucial in mobilizing nutrients from the body’s reserves when there is extra demand, such as when blood glucose levels are low after fasting or physical activity. The inappropriately high levels of glucagon among people with diabetes therefore contribute to increasing blood glucose. We have discovered that, by metabolizing circulating amino acids, the liver plays a key role in the secretion of glucagon from the pancreas and that the fatty deposits in the livers of obese people may cause the high levels of glucagon and thereby strongly contribute to poor regulation of blood glucose. Our project aims to chart this new liver-pancreas axis and thereby obtain new understanding about how obesity and type 2 diabetes develop, enabling new treatment strategies,” says Filip Knop.

The project is one of four cross-disciplinary projects receiving a four-year grant of about DKK 15 million each from the Novo Nordisk Foundation’s Tandem Programme. From BMI, Professor Thomas Jespersen also received a four-year grant for a project that will create new knowledge on electrical disturbances in the heart and thereby strive to minimize the number of people dying as a result.